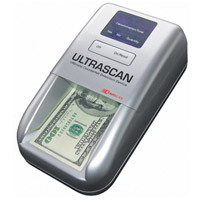 The CashScan Ultrascan 2600 Counterfeit Bill Detector - detects Multiple Magnetic Ink Locations, Security Threads and Infra- Red Markings on U.S. Currency. Cashscan Corp., the pioneer in state-of-the-art counterfeit detection technology introduces our most sophisticated innovation in the advancement of currency verification. The ULTRASCAN 2600 Counterfeit Detection Machine provides the highest degree of reliability in the industry with a combination of custom designed sensors integrated into a single unit. The result provides for the first time, a unit which is capable of detecting even the most sophisticated counterfeit notes, including previously undetectable "Supernotes". In tests performed with 100 of the most sophisticated counterfeit "Supernotes" the ULTRASCAN identified 100% of these notes as counterfeit ULTRASCAN MODEL 2600 Counterfeit Detector's combination of unique sensors ensures extreme accuracy and reliability in detecting counterfeit currency. Ultrascan is simple to operate providing the user with a green flashing light for genuine notes and a red light with a buzzer to identify suspect notes. Just insert a note into the Cashscan Electric Counterfeit Detection Machine and in less than a second you will have an answer.


Other CashScan Counterfeit Bill Detecting Machines available on this website:

Cashscan 1800: This Counterfeit Bill Detector is the most popular counterfeit detection device in the world, and for good reason. It is compact, lightweight and can be portable using AA battery option. This machine uses state of the art technology, by verifying the magnetic properties of the ink on the face of all U.S. Currency, and notifies you of any fake notes with a visual and audible sign

UniScan: If you are interested in a Counterfeit Bill Detector that has the capability to verify the currencies of over 20 countries look at the UniScan Counterfeit Detector available on this website.

SuperScan II Money Management System: This is a Serial Number Printer and Counterfeit Money Detector. The SuperScan II combines an accurate and reliable currency verification and OCR (Optical Character Recognition) technology for serial number scanning, which provides tractability and guarantees protection for the currency you handle. The SuperScan II works with a built- in printer.

SuperScan III: Has the same features as the SuperScan II BUT works with an external printer (not included) such as through a PC or laptop interface.

Be the first to write a review for CashScan UltraScan 2600 Counterfeit Bill Detector.